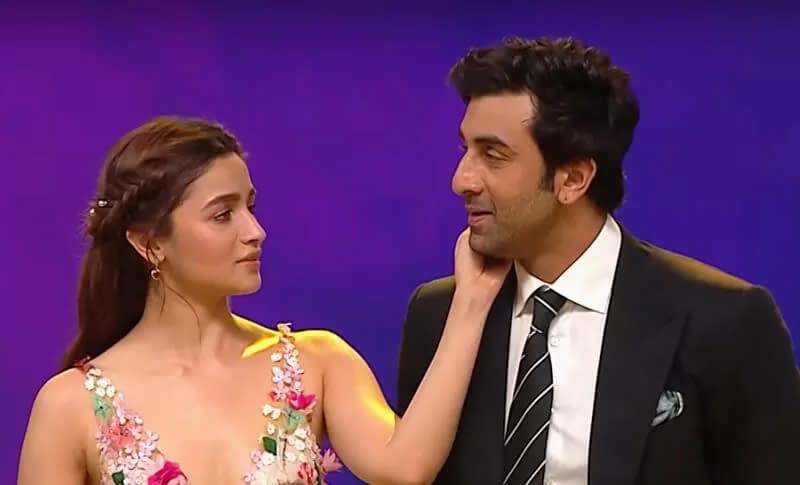 The ever-glowing couple of Bollywood indulges in some romance on the sets of Lays.

It is always fun to watch the moments from Behind the scenes. The Romance between Alia and Ranbir during the Ad shoot for Lays is all we see. They are also indulged in a conversation with the director. Alia Bhatt is doing well now. While she was suffering from the virus, she was in complete care under the doctors and also her boyfriend. It is good to see Ranbir and Alia on the same set to shoot the ad. The actress also involves herself in different commercials. However, her upcoming Gangubai Kathiawadi is on hold. No news is up about the resume for the shoot. However, in the trending news, Gangubai is ready to release with Vakeel Saab.

The good news is that the movie will get an official release in Telegu. The teaser is already out. In the most recent post by Ranbir Kapoor, we see the couple is having a good time and a fun shoot for Lays. In the first picture, Ranbir and Alia are carefully listening to the director. Alia is wearing a long olive green dress with a Cap. At the same time, Ranbir is wearing a white coat and denim pairing with white sneakers. In the following picture, Ranbir must be recording his Voice Over for the shoot. Recently, Ranbir was taking care of his girlfriend at the time of COVID. The couple is quite adorable.

Romance is in the air with Alia and Ranbir.

In the recent post, Ranbir Kapoor shared many behind the scenes from the Lays ad shoot. The Romance between the couple on the set is so sweet. The actor reads the caption, “#Ranbirkapoor and #aliabhatt behind the scene Lay’s ad.” The fans are showing love and support to the couple. Previously the shoot was complete before Alia fell ill. However, the rumors are hovering around that the couple will tie a knot soon. The Bollywood hunk asked Mahesh Bhatt for her daughter’s hand for marriage. However, we are waiting for the invitation cards to reach us soon.